HOME1 / News2 / Royal Grolsch now produces biomethane from its own wastewater thanks to...

Royal Grolsch now produces biomethane from its own wastewater thanks to the HoSt Group!

Beer brewer Grolsch has successfully produced the first biomethane in Enschede. On the brewery’s site, the biomethane plant produces 1 million Nm3 of biomethane annually from biogas produced from the brewery’s waste water. This is equivalent to the gas consumption of approximately 700 households in the region of Twente. Biomethane is a  sustainable substitute for fossil natural gas and is added to the existing natural gas network. The technology is supplied by bioenergy company and HoSt Group, also headquartered in Enschede, which owns and operates the plant in this ‘Energy as a Service‘ collaboration.

“With the arrival of the heat pipeline – a sustainable cooperation with the local waste management company Twence – it was necessary to give the biogas produced in the wastewater treatment plant another use, while still being used in the most optimal way. We are very proud of this green, regional cooperation. Close to home, we are further greening the brewery and the gas grid. On a larger scale, we are contributing to the achievement of national climate targets in the field of CO2 and nitrogen reduction,” says Grolsch Sustainability Manager Susan Ladrak.

Starting in December this year, Twence will be supplying sustainable heat via the newly constructed heat pipeline between Twence and Grolsch. The biogas from Grolsch’s water purification system was first used for heating purposes, but will now be used to produce biomethane (green gas). HoSt, which builds these biomethane systems all over the world, off-takes the biogas and converts it into biomethane using the installed biogas upgrader. “The government has ambitious goals for the production and use of biomethane to increase independence from natural gas imports, among other things. The scalable, clean and economically efficient technology to achieve this is already available and smaller regional projects like this will be needed and most certainly contribute to the goals,” says Jelle Klein Teeselink, CEO of the HoSt Group.

From biogas to biomethane

Biogas is not suitable for the natural gas network due to its lower methane content. Biogas upgrading with membrane technology is a proven technique to produce biomethane. The membranes separate the methane from the CO2 and other components by means of a pressure difference in the membrane. The result is two gas streams, one with a high methane value that is brought to the desired methane content of 89%. On site, the biomethane with the same properties as natural gas, including the well-known gas smell (THT), is delivered to the gas network. 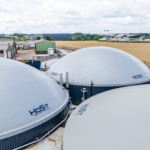 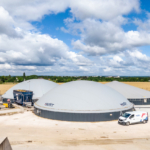 Because these cookies are strictly necessary to deliver the website, refusing them will have impact how our site functions. You always can block or delete cookies by changing your browser settings and force blocking all cookies on this website. But this will always prompt you to accept/refuse cookies when revisiting our site.

If you do not want that we track your visit to our site you can disable tracking in your browser here:

The following cookies are also needed - You can choose if you want to allow them: